When Giyani Land of Blood debut on 01 April 2019 at 21h30 on SABC 2, no one anticipated to see a character as colourful and honest as Mhani Dayina played by Candy Tsamandebele, let alone a Khelobedu speaking character on a XiTsonga telenovela drama series.

In the telenovelas genre on South African television, there has never been a character speaking Khelobedu. Khelobedu is not an official language but a Sepedi dialect, and not commercial, or so they say and it is a language spoken in Bolobedu, a queendom ruled by the revered rain queen, Rain Queen Modjadji. Not official in that it is not recognized as such and not part of the school curriculum. Khelobedu speaking leaners adopt Sepedi as their first language.

Then what is the language doing on such a beautifully created XiTsonga telenovela drama series?

When the news of an audition for a new XiTsonga series came to me, something in me said I should give it a try even though my acting experience was not as solid as that of an established actress. 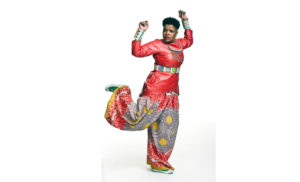 XiTsonga is a language I am fluent in as are most Khelobedu speaking people in Bolobedu, Limpopo. Most of my songs and those I have written for other artists are in XiTsonga. Off I went to the audition then  a call back.

When I bagged the role, excitement kicked in, then when the creators advised that the character will speak Khelobedu, ululations dominated that hour I was made aware of this development.

Ga Sedibeni village where I grew up, there are families in which you will find Tsonga women married into a Lobedu one, and next door at a XiTsonga village, the are those similarities just vise versa. A Lobedu woman married into a Tsonga one – Candy Mokwena.

These two cultures co-exist in villages, sharing resources and learning from each other in most parts of the Limpopo province especially in Bolobedu and Giyani. Marriages between the two cultures, the Tsongas and Lobedus, are always what one can call a history and culture lessons. Giyani Land of Blood has managed to capture these realities through this character and her husband Johnny Homu.

The call for Khelobedu to be made an official language and for other television daily soapies and telenovelas to include this language will be an important one from hereon. Mhani Dayina represent someone’s aunt, sister, mother etc. and there are still many Khelobedu speaking characters which can be created.

I am so glad the creators saw the need to create this character, no one in the television industry will now say it doesn’t work or sell. This language exist and it deserves all the publicity in the world. South Africa at large needs to hear the language more and more, Balobedu need something to identify with on main stream television too, it is very important – Candy Mokwena.

The plot and twists of the drama unfolds on Giyani Land of Blood Monday to Wednesday on SABC 2 at 21h30, and Mhani Dayina will be there at her tavern with her Khelobedu.