When the founders of this world-acclaimed group conceived their very first show in 1994; it was to celebrate the South Africa’s smooth transition to democracy. In 2019, their bold and daring 23rd offering is filled with creative elements and adventurous musical expression, driven by the two young Musical Directors in the name of Mnqobi Nxumalo and Sphiwe Ngcobo.

MTN Joyous Celebration’s music has become a soundtrack in the lives of many South Africans over the years. People are able to remember specific times when specific songs carried them through hard times in their lives, as well as songs that helped them celebrate good times. 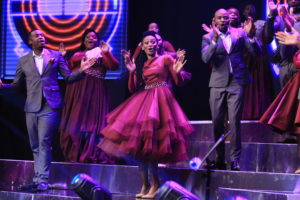 Pastor Mthunzi Namba, says: “The Joyous 23 show, like previous shows, has something for everyone. It’s fresh and unique, but still offers the ‘old’ Joyous sound even after we have experimented and included new and innovative elements. To remain relevant for over 20 years in an industry that’s so competitive has been a challenge, but we have managed to keep going because of the support of our fans and by the grace of God.”

According to Pastor Jabu Hlongwane, the people who have made Joyous what it is today deserve a treat, and that is the reason they pull all stops when it comes to new productions. He also adds: “Our fans and supporters, sponsors and partners alike have become accustomed to quality and the wow factor in our offerings. Our shows are more than just an entertainment platform for music lovers; they are also a platform that allows for spiritual growth, sharing joyful moments in the Lord, freedom of being and expressing oneself through music and dance.”

The award-winning musical ensemble has had a remarkable journey with their official sponsor, MTN, with the company having been a part of the Joyous family for 13 years. Jacqui O’Sullivan: Executive for Corporate Affairs at MTN says: “We are excited and looking forward to be a part of this year’s MTN Joyous Celebration Tour 23, which kicks off during the Easter weekend.” She also asserts that MTN strongly believes in supporting and showcasing South Africa’s musical talent and promoting music that exposes more South Africans to the many different genres that exist across our diverse nation.

The continued partnership with the Joyous Celebration brand, allows MTN to bring customers and fans closer to their passions, enabling greater access, engagement and connectivity to the things they love. 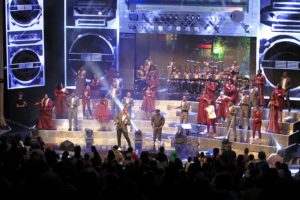 The stage design for Joyous 23 is put together by a team that always pursues freshness in terms of look and feel of the set. The fresh depiction of musical elements incorporated in the design befits the brand stature as pathfinders in live-show staging.

Some of the new and innovative elements included in Joyous 23 augment the “old” songs that Joyous fans have come to love with contemporary sounds and rhythms. “There is something for everyone – from songs sung in charismatic churches to the audience that is looking for traditional church songs sung in the mainline churches or Zion churches,” says Hlongwane. “Similarly, those who are younger and are up to contemporary upbeat songs are definitely catered for in this album. These combined elements promise a masterpiece to feed your ears, get you tapping your feet and singing along while you define your own freedom through the music,” he concludes.

Tickets are available at Computicket and Shoprite / Checkers starting from R200 per ticket. Patrons are encouraged to buy tickets early to avoid disappointment.e