Flying Fish has announced the launch of its Ultimate Backyard Festival experience as part of their Flavour Chillas campaign.

The excitement was palpable as it was announced that Jamaican born trap house jazz musician, Masego, was heading back to South Africa to headline the Festival on 1 May, in Johannesburg. Masego was supposed to headline last year’s Flying Fish Flavour Odyssey but couldn’t make it due to unforeseen circumstances. 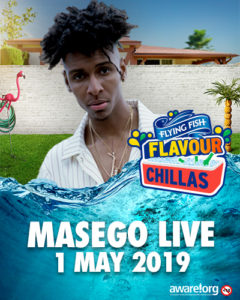 Flying Fish is known for paying homage to local talent that are curating never seen before experiences in the various festival flavours of music, fashion, photography, food, art and culture. The Ultimate Backyard Flavour Chillas is expected to be even bigger and extraordinary.

Through the Flavour Chillas campaign, South Africans will get all the tips and tricks they need to host festivals in their own backyards.

The brand has partnered with the most flavoursome festival experts who will be sharing their expertise and giving away weekly prizes; Nobody will feel any FOMO for missing out on all the festivals happening around the country.

“Flying Fish Flavour Chillas is set to be the most flavourful property to hit Mzansi this year”, says Flying Fish Marketing Manager, Colleen Duvenage. “To stand a chance to win tickets to the Ultimate Flavour Chillas as well as weekly festival, buy a Flying Fish, dial the number under the cap, and say HELLO.”

In addition to Lady Lady hitmaker, Masego, guests attending this year’s Ultimate Flavour Chillas experience can expect a diverse local line up that includes songstress Shekinah, Una Rams and Muzi amongst others.

Limited tickets are on sale as of midday Monday 8 April at 12h00.