She registered for her degree in person, diligently attended lectures, defended her proposal after waiting in the queue like all other students and on Tuesday Higher Education Minister Naledi Pandor reaped her reward: she obtained a PhD from the University of Pretoria.

“I am a firm advocate of continuous learning,” said Pandor, who now holds a doctorate in education. “We should all try to pursue our dreams and learn as much as we can. We need to encourage our institutions to be aware of the diversity of persons who may wish to resume their education or attempt new professional studies. I don’t see enough attempts at significant drawing in of adults to continuous learning.”

I received a phd in education from the University of Pretoria this afternoon. Now there are two doctors in the house ⁦@aishapandor⁩ ⁦@alenribic⁩ ⁦@pandorsuraya⁩ ⁦@UPTuks⁩ #Graduation2019 pic.twitter.com/JglegnzQDW

The university said in a statement Pandor’s research topic was titled “The contested meaning of transformation in higher education in post- apartheid South Africa”. The work she produced has received acclaim from international examiners like Professor Fazal Rizvi from the University of Melbourne, who congratulated her on a “most insightful thesis”. Thanks to Pandor’s thesis he now has a “more nuanced understanding of South African higher education and theoretical issues” he had not previously encountered.

Pandor, a former teacher who already holds a Master’s in Education Policy and Practice in Multi-racial Societies, as well as Linguistics from the applied linguistics perspective, admitted to being nervous and “slightly embarrassed” at being an older student.

She said she chose to further her studies in education because it fascinated her.

“I learnt that there is a vast amount of absolutely fascinating education information that we need to tap into much more than we do today. I also learnt how to use research material and to carry out a very demanding academic schedule,” she said.

“Every moment outside work and politics was given to my studies. I tried to balance [it] but some areas were neglected, especially family.”

Pandor said she made every effort to avoid her studies having a negative impact on her work schedule. “But I did accept fewer invitations for three years of the four.”

‘I am your student’

Professor Chika Sehoole, Dean of the University of Pretoria’s Faculty of Education, was Pandor’s supervisor.

“After I agreed to supervise her, she set the rules for the relationship,” said Sehoole, who was also a former colleague from before the education department was split into basic and higher education.

“She [Pandor] said to me, ‘Now you are my Professor, I am your student. You call me Naledi, and I will call you Professor’. That was a shocker! I could not believe it, especially given our previous relationship in the Department of Education.”

He found it difficult to call her by her name, he admitted, but described her as a good student.

“I'm an advocate of continuous learning. We should all try to pursue our dreams & learn as much as we can.” – Congratulations to Higher Education & Training Minister Naledi Pandor, who got her PhD in Education from the University of Pretoria today! More: https://t.co/wDB6Rdlux7 pic.twitter.com/wV1DaNRqYs

“She was the kind of student every supervisor would like to work with. She worked very hard and did not want to submit substandard or mediocre work.”

Pandor said Sehoole was an “excellent supervisor” who built a positive relationship with her. “He knew when to advise or support, when to apply pressure, and when to leave me to my own devices.”

“Even though there were one or so meetings where I felt weepy, the whole time with my supervisor was inspiring, and his belief that I could do it was a great motivation.”

The former Science and Technology minister said in one of her department’s budget speeches in Parliament five years ago that South Africa was producing too few doctoral graduates. Then there were just more than 1 800 PhDs per annum, City Press reported at the time. 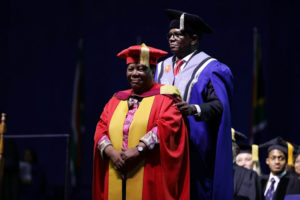 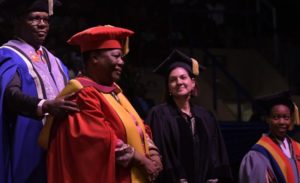 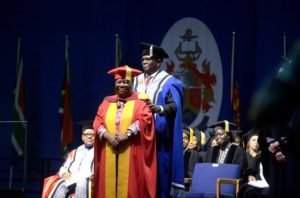 Pandor said the National Development Plan sets a target of 100 000 PhDs by 2030 to improve research and innovation capacity. To reach that target, there needs to be 6 000 PhDs per year.

“With this tremendous achievement of the doctorate the Minister sets a powerful example of what is possible in terms of learning and leadership for all our youth. There can be no better example of a role model for South Africans dedicated to learning.”