From the village to a superstar, Sho Madjozi has won the Best New International Act at the 2019 BET Awards in Los Angeles.

In the category decided by fans, Madjozi beat the likes of Teniola Apata from Nigeria, Headie One from the UK and France’s Jok’Air and Nesly at Sunday’s event.

As she accepted the award, the Huku singer said: “My story is a testament that you can be from any village and any forgotten part of the world and you can still be a superstar. For girls that come from Limpopo, I just want to say you don’t have to change who you are, you can still be big.”

BET Africa (DStv channel 129) is thrilled to announce African talent won big at the 2019 BET Awards with South African singer Sho Madjozi being awarded the Best New International Act while Nigeria’s Burna Boy claimed the Best International Act and Pan African activist Chaka Bars was honoured with the 2019 BET International Global Good Award. The show which was broadcast live for the first time in the African continent on Tuesday, will also be broadcast this Saturday, 29 June from 19:00 CAT only on BET Africa (DStv channel 129) featuring unseen behind the scenes exclusive footage of Sho Madjozi, rapper AKA and Face of BET in Africa Nomalanga Shozi.

Africa was well represented as AKA, Burna Boy and Chaka Bars graced the red carpet. Other African stars who shone on the red carpet included the face of BET in Africa Nomalanga Shozi and actress Nomzamo Mbatha. 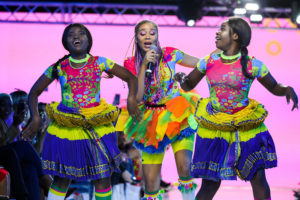 Sho Madjozi collected the coveted Best New International Act award during the red carpet pre show. The “Huku” hitmaker becomes the first South African female musician to win the award at a powerful and show-stopping ceremony included a lineup of artists, entertainers, cultural icons and inspiring humanitarians across more than 18 categories which all took place at the Microsoft Theater in Los Angeles, CA on Sunday, June 23, 2019.

“This win is huge; and like I said in my speech you can really be from anywhere and be able to get anywhere. You also don’t need to change yourself for that to happen. What has been a highlight for me at the awards meeting people and getting pictures with a lot of dope people. Cardi B congratulated me and I thought that was really sweet. People in general where quite excited for me and everyone could see that it was an emotional moment for me. I was actually shocked and completely taken by surprise when my name was called. Thank you so much to my fans for voting for me; you are so dedicated and I am so proud of the Limpopo Champions League and my people for voting. We will definitely be celebrating when I get home,” commented the newly crowned Best New International Act winner Sho Madjozi. 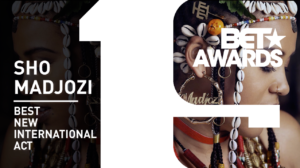 In addition to Sho Madjozi’s historic win at 2019 BET Awards saw African Acts fly the flag high with Nigeria’s Burna Boy claiming the Best International Act Award. His mother and manager Bose Ogulu accepted the award and delivered a touching speech where she commented; “Thank you very much BET, thank you, Africa. That is the constituency for which we got noticed. The message from Burna would be that every black person should please remember that you were Africans before you became anything else.”

Chaka Bars,  31-year-old UK based Instagram activist/Pan African developer was honoured with the 2019 BET International Global Good Award. The Award was presented during the red carpet pre-show for the 19th annual BET Awards which was co hosted by the Face of BET in Africa Nomalanga Shozi.

This year’s broadcast celebrated the very best in entertainment and culture with performances and appearances by some of the biggest names across television, film, and music. The BET AWARDS, which has become synonymous with powerful artistry and social commentary, continued to spotlight and celebrate the artists and creators of tomorrow, making the ceremony one of the most news-provoking and talked-about broadcasts year after year.

The 2019 BET Awards were broadcast in partnership with Russian Bear and My Muze by Vodacom on Monday, 24 June 2019. Audiences will be spoiled to exclusive behind-the-scenes footage from the VIP parties, what went down in the streets of Los Angeles, and never-seen-before red carpet moments through the eyes of SA’s stars AKA and Sho Madjozi all hosted by Nomalanga Shozi this Saturday, 29 June from 19:00 CAT only on BET Africa (DStv channel 129).